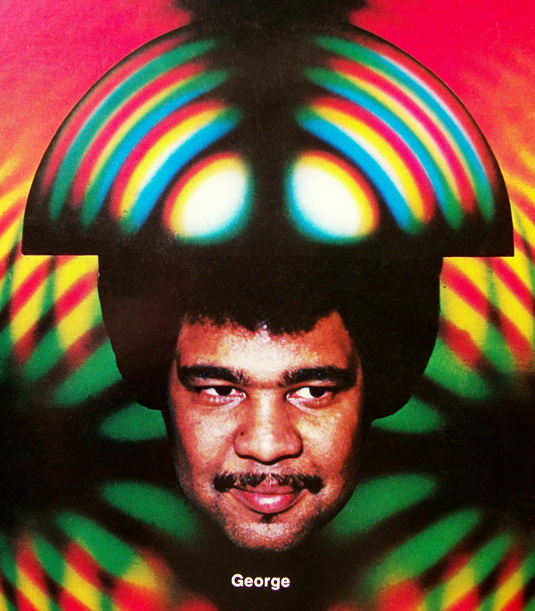 A TRIBUTE TO THE

“STARFUNK and the ASTRAL PIONEERS”

In 2010, I sent an email to “Maestro George Duke” regarding becoming the Music Director for “Starfunk and the Astral Pioneers.”  I didn’t know George Duke at the time, but I found an email address on his website. After about a week of waiting for a response, I figured that I was not going to hear from him .  However, a few days later, the phone rang, and to my delight it was George Duke.  I was so surprised that we both laughed from my reaction, and after that initial shock we talked as though we had known each other for a lifetime. George told me that he was interested in reading my screenplay because he loved the concept of a motion picture that featured Funk and Funk culture.

We made arrangements to meet at the Chandara Restaurant in Hollywood.  At the time, it was one of Duke’s favorite eating spots and, coincidentally, it was one of mine, too.  It was at this restaurant that George agreed to read the screenplay for “Starfunk and the Astral Pioneers” to determine if it was right for him as Music Director.  He signed the NDA that I had brought with me, and I made plans to send him a copy of the screenplay to read on a flight from Los Angeles to Japan.  I will never forget his kindness and enthusiasm as we talked excitedly about the music for the film. George Duke was a giant in the music industry who had already struck platinum and gold as it regards Funk records that he had produced. Although I didn’t get to know him very long, I really miss him as I have continued to work to try to get this motion picture produced.

So, George was flying out to Sony Music in Japan in a few days. I sent him a copy of the screenplay before he left, and he told me that he would try to read it during the flight to Japan and get back to me after he returned from Japan in a few weeks. A few days passed and I got a phone call from George Duke who was still in Japan. He was so very excited and told me that he loved the screenplay and that he would sign a letter of interest as the Music Director for the motion picture as soon as he got back from Japan. Later during production discussions, George told me that he would need the services of Bootsy Collins for the project. He introduced me to “Bootsy” by email and telephone. George said it would be important to have Bootsy on his team for the music in this project if were going to create the funkiest soundtrack in the world for a motion picture. These were exciting times, miraculous times. George Duke was an icon that I was able to contact by an email address I found on his website, folks. We had never met before, but he treated me like I was someone he had known all of his life. I think George Duke made everyone he met feel special. That was George Duke.

To honor him, I have named him the “HONORARY MUSIC DIRECTOR” of “Starfunk and the Astral Pioneers.” When the world lost George Duke, it lost an angel of Funk. I hope and pray that we can find another Music Director for this project who has all of the elements that George Duke possessed. George Duke, the Funk Maestro, Jazz giant, R&B guru, would have brought so much fun, so much professionalism, talent, dedication and funky music to this historic production.

The Funkaurian Freedom Song – During the Great Galaxy Wars the inhabitants of the planet Funkaura, the Funkaurians, fought to free themselves and other planet inhabitants.  They needed a way to defeat the evil that had set out to destroy and enslave them.  They needed to find a way to defeat them without becoming evil themselves. They discovered how to use the power of Funk-enhanced music to defeat their enemies.  After their victory, the Astral Pioneers wrote a song, an anthem, to commemorate their victory. “WE’RE FUNK POWER, FROM FUNKAURA”

Starfunk and the Astral Pioneers OST

“We Came to Play”

We Came to Play

Starfunk and the Astral Pioneers OST