“EVOLVE-OLUTION of FUNK “A HISTORY OF FUNK” 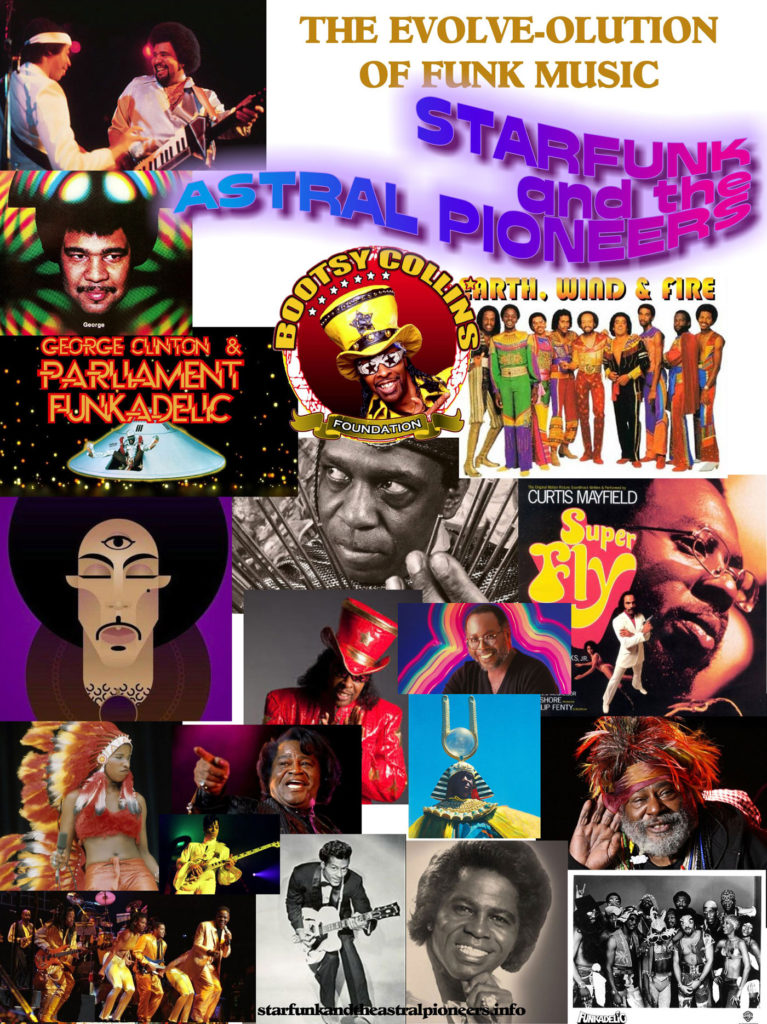 “SO GLAD THAT FUNK IS WITH ME”

Recently I deleted an entire section of this Evolve-otion of funk page after meeting a professor Scot Brown, who was referred to me by my friend George Gee who met him during his work as a member of the Funk Hall of Fame. Scot Brown, introduced me to a project that I had never heard about before. A documentary about funk music that also features many of the chief architects of modern day funk music. The documentary is entitled “FINDING THE FUNK”. You can purchase it or rent it on Amazon.com. I realized that the details that they cover as it regards the  history of funk here on Earth was far more relevant than anything I could offer you here on this page and far more entertaining too. So I am asking you, if you really want to gain some true perspectives and insights into the modern day history of FUNK go rent and or buy the DVD. “FINDING THE FUNK”

THE EVOLUTION FROM FUNK MUSIC TO

FUNK music is mysterious and has probably been around on the planet Earth in one form or another for longer than recorded time. It was suggested that even the most advanced civilizations known to have inhabited the Earth, those responsible for the mysterious pyramids around the globe, understood the musical equations of funk music in every scenario governing their way of life. These enlightened individuals understood that Funk is a spirited vibration of song, music and syncopation laced with intent, so magnificent that it could be played on THE ONE and without being on THE ONE. That Funk is a spirit set to a beat and tune that cuts through the obvious to the to reveal the unknown core in living beings from whom funky music’s influence emanates. Funk is the child created from the marriage of Jazz and R & B here on Earth. Once you have been touched by the Funk in music, you are forever changed. Music is the greatest vibratory power in the universe, and funk is amongst  its highest form of vibratory spiritual influence. Think of Funk as the essence of music that multiplies the vibratory nature of all things through music to touch a being the center of their responsive emoting core. ALL MUSIC has emotive power but when you put that funk on it music’s vibration and essence are multiplied exponentially.

All music generates an emotive reflex in beings that can translate its vibratory values and resonating message. Whenever people are moved by song to dance and feel and share they emote what is delivered of the music together.  It is the funk that fuses us all into a cipher that creates a single shared experience into a multiverse of experience, despite how many it touches at one time, funk is still a singularity.

I remember when I first began taking Kung Fu many years ago, I asked my teacher what was the meaning of Kung Fu. He told me that Kung Fu was not the martial art itself. He explained that I could have Kung Fu in anything. Having Kung Fu simply meant that you had mastered a thing. You could have Kung Fu as a singer, dancer, rapper, architect and/or even a plumber. Kung Fu in music, to me, produces the highest form of whatever style of music you play when you put some funk on it.

So, Funk, in my mind, actually began in music that was played in a way that gave itself meaning through the conveyance of a cosmic consciousness derived from the African expression of universal law and spiritual resonance. Understanding how to emote the funk vibration and magnify it through the use of music, lyric and dance was made possible through trial and error. Through these frequencies musicians have been able to touch all those who hear and feel the stank of it. Those who are most affected by it, are infected by that vibe causing them to replicate the vibratory experience in a way that made them feel that they had to re-express the funk they heard and felt in an even funkier way because the funk they experienced beforehand caused them to emote its vibration together as one body rather than as singles separate individuals. If you play close attention, most musicians, when they are really playing good funk have an expression on their faces like they are smelling something shat stanks. To me, whenever you see that expression on the face of a player while they play, its gonna’ whatever they are playing is gonna’be funky. Now I can’t be certain, but it occurs to me that it is entirely possible that’s where the name FUNK originates from.

THE AFRICAN EXPRESSION OF FUNK

The African American expression of Funk evolved out of the African American experience in America. It came out of a time when African Americans had been subjected to many wrongs trials and tribulations and I believe because we were  virtually powerless to correct our physical condition for so many years. Our seeming powerlessness gave us a more pronounced ability  to vibrate collectively together through music as a natural unconscious defense mechanism due to oppiession. That defense mechanism spurred the vibratory influence of music that resonates from within every living being on Earth. Hence we called our so called Black music, Soul Music because is the parent of all funk music today. The energy derived from funk music can be and is astoundingly spiritual in nature. I am not the greatest historian on Funk music, nor theoretic, and there may be some out there who will disagree with some, if not all, of what I have to say in this brief recall of the history of funk. If they, or you, disagree I view that as a good thing. If nothing else it can spearhead a search for the truth. The African American expression of Funk is the purest on Earth because it was squeezed out of oppressive atmosphere and intended to strengthen those who heard it shared it, honed it and practiced it, and played it, who have endured the perils of racist oppressive against Black people of America.

Many will point to Dayton, Ohio as one of the cities that gave birth and rise to funk music. It is a good argument, and we can never discount the vibrancy and growth that funk was given from the many diverse performers who worked to perfect the sound of funk music from Dayton, Ohio.

SUN RA was a phenomenal musician who had many of the greatest jazz musicians in the world come and play with him and his ARKESTRA. The “ARK” was SUN RA’s spaceship and the ARKESTRA were the musicians who played upon and propelled it. The music they played was a jazz fusion that still had not been defined as what we call present day funk. However, if you listen to it, you can hear the strains of music that would someday come to define funk as we know it today. The mythology of funk music. It is my belief that the outter space mythology of funk music came from the farsighted mission and vision of the man they called SUNRA and eventually evolved and ballooned ro create the modern day space and music powered mythology of the Funk music of the 70’s until now. I beleive the newest form of that expression is the creation of the motion picture “STARFUNK and the ASTRAL PIONEERS”.

SUN RA’s “ARK” would land in this film and they, his ARKESTRA, would appear from out of his spacecraft from the cosmic void playing their instruments, sometimes singing and dancing.

It was suggesting that his “ARK”, spacecraft, was propelled by music. The music was a sort of cosmic Jazz fusion that one could say was most likely a precursor to present day funk music void of the trappings of commercial popular appeal. Although his music was intriguing and always enlightening and entertaining, his crew would be adorned in other worldly attire and his message was basically that music and musical vibration could power anything and had the ability to transform destiny enough to save Earth from the present path of destruction that it has taken.

SUN RA: Space Is The Place

SUN RA was celebrated around the world. He and his ARKESTRA were the only group that the Egyptian Government would allow to play on top of the great pyramids of Giza. He was famous around the world and welcomed whenever and wherever they appeared. His musicians, dancers and singers were deeply devoted to him, very similarly as was James Brown’s crew and Parliament Funkadelic’s members were dedicated to George Clinton & James Brown, respectively. At the nucleus of their success resided the fact that they were like a big, talented musical family creating the same funky vibration.

THE NEXT EVOLUTION OF FUNK!

STARFUNK and the ASTRAL PIONEERS is the next natural progression of funk music. We are going to funk up motion picture theaters through our movie and tell a great story while feeding the minds, ears and spirits of adoring fans with some great funk music. STARFUNK and the ASTRAL PIONEERS is a script that has risen from the history, the legend, and the mythology

of funk. There has never been a motion picture that has dealt with the cosmic legend surrounding funk music like Starfunk and the Astral Pioneers does. The mythology that Funk has arrived on Earth as a cosmic vibration that originated beyond Earth is what inspired me to write the story told in this motion picture screenplay. As a matter of fact, Funk music is probably the only connection the screenplay has to planet Earth. Although, ironically, several of the plot lines seem to be true of conditions that currently exist on Earth. I know and so will everyone else after seeing this movie, Funk is universal.

STARFUNK and the ASTRAL PIONEERS, is an Award Winning Film waiting to be made. It has a fresh and unique story, characters, places, situations and swashbuckling circumstances. It is the brainstorm of Glenn Towery, who is an award winning film director, screenplay and theater author. Glenn graduated from Columbia College Hollywood film school, as its first African American valedictorian in 1997. He received his Bachelor of Arts in Cinema from that school and was Magna Cum Laude. Glenn is now 65 years old. He retired as a counselor to at risk children and youth where he worked in Los Angeles, CA. He is also a Vietnam Combat Veteran who has suffered the debilitating symptoms of PTSD. Glenn wants to bring this wonderful story of funk to life and, at the same time, fulfill his dream of becoming a successful filmmaker. If you love funk, if you would like to see a historic funky movie, if you believe in making dreams come true, support this effort to produce this film, STARFUNK and the ASTRAL PIONEERS.

Click here to learn how you can contribute to the production of this motion picture!

TO HELP US TO PRODUCE THE FUNKIEST MOTION PICTURE EVER MADE! 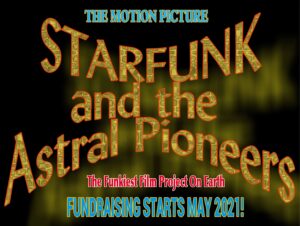