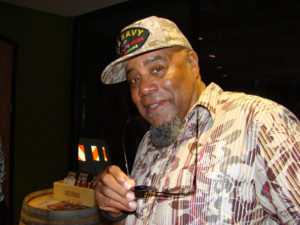 “EVERYTHING IS POSSIBLE NOW”

Glenn Towery has been a performer most of his life. He and his brother Stonewall started off as a singing duo when they were children growing up in South Central Los Angeles. They were preteens and would sing and dance for anyone who would give them an ear. The loved to write and sing songs and Glenn’s brother Stonewall has become a multi-award winning songwriter during his lifetime writing and performing under the pseudonym “Stoneman”

Glenn joined the United States NAVY when he turned 19 years old and today is a Vietnam Combat Veteran who has been diagnosed with combat related PTSD. Although the disability affects many aspects of his life in the past he has fought back by helping others. In 2014 Glenn created the Veterans Suicide Prevention Channel. A channel that is available for veterans 24 hours a day, 7 days a week online that offers programs and shows designed to help veterans and their family members who suffer with PTSD: www.vspchannel

After returning from the military Glenn decided that he wanted to become an actor. He moved back to Los Angeles and got himself an agent and a manager. He became part of the world famous Inner City Cultural Center a place reknown for participation of stars from stage, film and television. Glenn did several plays there and became known as an exceptional actor /director/writer. In 1978 Glenn did a commercial called the “BIC SHAVING STOP” he had a featured roll in that commercial. At the time he was represented by Arnold Gerrittson of the reknown Gerrittson International Agency. The cast and crew of “BIC SHAVING STOP” won a GOLDEN LION Award for the commercial at the Cannes Film Festival the next year.

Glenn decided to go to film school in 1993, he attended Columbia College Hollywood as a Cinema Major who minored in Television Production. It was just what the doctor ordered. Three years later, in 1997, Glenn earned a Bachelors of Art Degree in Cinema and graduated as the first African American valedictorian of that school. Glenn never has worked for any film companies in Hollywood. After becoming a single parent, he decided that he could not work in the industry and support himself and his child. So he became an Independent Producer because it allowed him to produce and to write in his spare time while he was off work.

In 2008 Glenn retired due to PTSD, although the VA deems him 100% disabled, service connected, he has remained active doing other things for himself, his family and other veterans. In 2013, he moved from Los Angeles to Round Rock, Texas where he established the Veterans Suicide Prevention Channel. Glenn has directed and produced more than 20 shows and programs for the VSPChannel and continued to write songs and produce and direct music videos for them. “It’s great therapy to help others and music is always healing” he says.

At the end of 2016, Glenn decided to dust off two scripts that he had written in the past and to rewrite them for possible production as an additional money making tool for himself and his veterans channel: “STARFUNK and the ASTRAL PIONEERS” and “HITCHHIKE FOR LOVE” were the two scripts. Glenn submitted “STARFUNK and the ASTRAL PIONEERS” to the Cannes Screenwriting Contest in January of 2017 and received notice that it won an award in the coveted SCI-Fi genre in April of 2017. Since then that script as well as “HITCHHIKE FOR LOVE” has garnered “SEMI FINALIST AWARDS” also at the “AUSTIN REVOLUTION FILM FESTIVAL” which will be held in Austin Texas in September of 2017.

“What this has shown me is that it is never too late if you are good at something and love to do it. By producing this film, “STARFUNK and the ASTRAL PIONEERS” I can still try to accomplish living the impossible dream, I realize now that “Everything Is Possible”. At 65 years old I can become a filmmaker and create a project that will mystify and intrigue the world for years to come. I hope that you will help me to make this dream come true.”